The Coptic Church was established in the name of the Lord Jesus Christ by St. Mark the Evangelist in the city of Alexandria around 43 A.D.

The church adheres to the Nicene Creed. St. Athanasius (296-373 A.D.), the twentieth Pope of the Coptic Church effectively defended the Doctrine of the Lord Jesus Christ’s Divinity at the Council of Nicea in 325 A.D.

His affirmation of the doctrine earned him the title; “Father of Orthodoxy” and St. Athanasius “the Apostolic”. The term “Coptic” is derived from the Greek “Aigyptos” meaning “Egyptian”. When the Arabs arrived in Egypt in the seventh century, they called the Egyptians “qibt”. Thus the Arabic word “qibt” came to mean both “Egyptians” and “Christians”.

The term “Orthodoxy” here refers to the preservation of the “Original Faith” by the Copts who, throughout the ages, defended the Old Creed against the numerous attacks aimed at it.

The Coptic Orthodox Church believes that the Holy Trinity: God The Father, God The Son, and God The Holy Spirit, are equal to each other in one unity; and that the Lord Jesus Christ is the only Savior of the world. Less changes have taken place in the Coptic Church than in any other church whether in the ritual or doctrine aspects and that the succession of the Coptic Patriarchs, Bishops, priests and Deacons has been continuous.

Our mission is a mission of love, the love of our Lord and Savior Jesus Christ

The cornerstone of Christianity is love, because God is love. At Saint Peter & Saint Paul, we are committed to:

St. Mark the Apostle, the Founder of the Coptic Church. The Coptic Church or the Church of Alexandria is called "Sees of St. Mark"; one of the earliest four sees: Jerusalem, Antioch, Alexandria, and Rome. 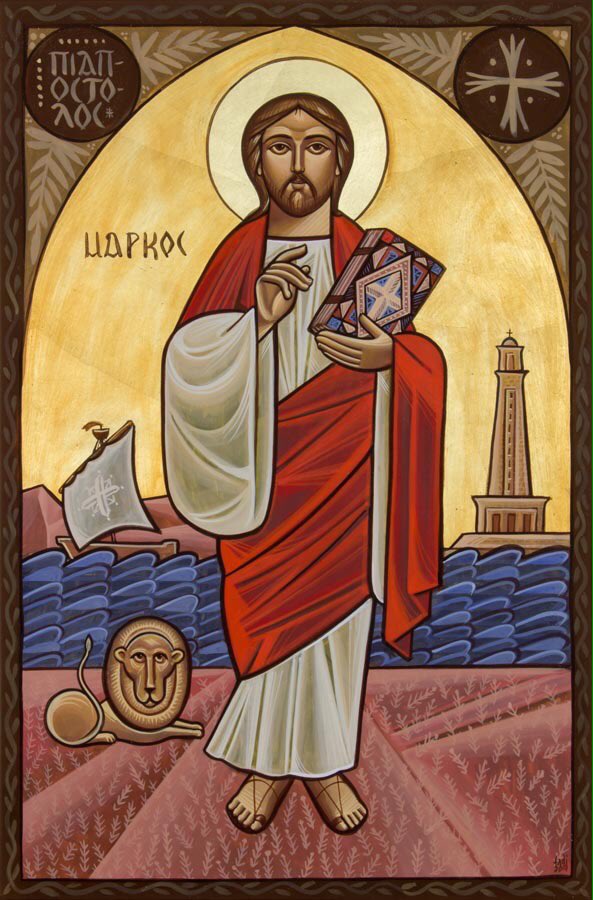 The Copts are proud of the apostolicity of their Church, whose founder is St. Mark; one of the seventy Apostles (Mk 10:10), and one of the four Evangelists. He is regarded by the Coptic hierarchy as the first of their unbroken 117 patriarchs, and also the first of a stream of Egyptian martyrs.

This apostolicity was not only furnished on grounds of its foundation but rather by the persistence of the Church in observing the same faith received by the Apostle and his successors, the Holy Fathers.

St. Mark was an African native of Jewish parents who belonged to the Levites' tribe. His family lived in Cyrenaica until they were attacked by some barbarians, and lost their property. Consequently, they moved to Jerusalem with their child John Mark (Acts 12:12, 25; 15:37). Apparently, he was given a good education and became conversant in both Greek and Latin in addition to Hebrew. His family was highly religious and in close relationship with the Lord Jesus Christ. His cousin was St. Barnabas and his father's cousin was St. Peter. His mother, Mary, played an important part in the early days of the Church in Jerusalem. Her upper room became the first Christian church in the world where the Lord Jesus Christ Himself instituted the Holy Eucharist (Mk 14:12-26). Also, this is the same place where the Lord appeared to the disciples after His resurrection and His Holy Spirit came upon them.

Young Mark was always associated with the Lord, who choose him as one of the seventy. He is mentioned in the Holy Scriptures in a number of events related with the Lord. For example, he was present at the wedding of Cana of Galilee, and was the man who had been carrying the jar when the two disciples went to prepare a place for the celebration of the Passover (Mk 14:13-14; Lk 22:11).

St. Mark and The Lion

The vioce of the lion is the symbol of St. Mark for two reasons:

Preaching with the Apostles

At first, St. Mark accompanied St. Peter on his missionary journeys inside Jerusalem and Judea. Then he accompanied St. Paul and St. Barnabas on their first missionary journey to Antioch, Cyprus and Asia Minor, but for some reason or another he left them and returned home (Acts 13:13). On their second trip, St. Paul refused to take him along because he left them on the previous mission; for this reason St. Barnabas was separated from St. Paul and went to Cyprus with his cousin St. Mark (Acts 15:36-41). There, he departed in the Lord and St. Mark buried him. Afterwards, St. Paul needed St. Mark with him and they both preached in Colosse (Col 4:10), Rome (Phil 24; 2 Tim 4:11) and perhaps in Venice.

St. Mark's real labor lays in Africa. He left Rome to Pentapolis, where he was born. After planting the seeds of faith and performing many miracles he traveled to Egypt, through the Oasis, the desert of Libya, Upper Egypt and then entered Alexandria from its eastern gate in 61 A.D.

On his arrival, the strap of his sandal was loose. He went to a cobbler to mend it. When the cobbler - Anianos - took an awl to work on it, he accidentally pierced his hand and cried aloud "O One God". At this utterance, St. Mark rejoiced and after miraculously healing the man's wound, took courage and began to preach to the hungry ears of his convert. The spark was ignited and Anianos took the Apostle home with him. He and his family were baptized, and many others followed.

The spread of Christianity must have been quite remarkable because pagans were furious and ought St. Mark everywhere. Smelling the danger, the Apostle ordained a bishop (Anianos), three priests and seven deacons to look after the congregation if anything befell him. He left Alexandria to Berce, then to Rome, where he met St. Peter and St. Paul and remained there until their martyrdom in 64 A.D.

Upon returning to Alexandria in 65 AD, St. Mark found his people firm in faith and thus decided to visit Pentapolis. There, he spent two years preaching and performing miracles, ordaining bishops and priests, and winning more converts.

Finally he returned to Alexandria and was overjoyed to find that Christians had multiplied so much that they were able to build a considerable church in the suburban district of Baucalis.

In the year 68 AD, Easter fell on the same day as the Serapis feast. The furious heathen mob had gathered in the Serapis temple at Alexandria and then descended on the Christians who were celebrating the Glorous Resurrection at Baucalis. St. Mark was seized, dragged with a rope through the main streets of the city. Crowds were shouting "The ox must be led to Baucalis," a precipitous place full of rock where they fed the oxen that were used in the sacrifice to idols. At nightfall the saint was thrown into prison, where he was cheered by the vision of an angel, strengthening him saying, "Now your hour has come O Mark, the good minister, to receive your recompense. Be encouraged, for your name has been written in the book of life." When the angel disappeared, St. Mark thanked God for sending His angel to him. Suddenly, the Savior Himself appeared and said to him, "Peace be to you Mark, my disciple and evangelist!" St. Mark started to shout, "O My Lord Jesus" but the vision disappeared.

On the following morning probably during the triumphal procession of Serapis he was again dragged around the city till death. His bloody flesh was torn, and it was their intention to cremate his remains, but the wind blew and the rain fell in torrents and the populaces disperse. Christians stole his body and secretly buried him in a grave that they had engraved on a rock under the altar of the church.

St. Mark was a broad-minded Apostle. His ministry was quite productive and covered large field of activities. These include: